Paperback Horror has moved to a new venue. For ARC and review queries/submissions, please contact me at Dreadful Tales. You can find the email address on the "About Us" page. Thanks, PBH.

Here's where you can find information of any of the Giveaways that I'll be doing when I get the chance. Most of the time these books are going to be paid for out of my own pocket, so you can bet I'm going to make it worth it. And hell...you're going to benefit from it with a free book - so who's complaining, right? If you don't like free stuff, you're in the wrong place.

This contest is now closed.

The winner of Volume 1 - 7 of the JASON DARK: VAMPIRE HUNTER series is Jason Derrick. You package will be with you shortly, you lucky... 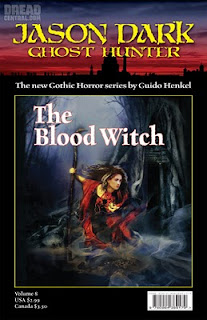 Here you go, kiddos! Another giveaway!


Go to the Jason Dark: Ghost Hunter website and purchase the eighth volume of the Jason Dark series, and I'll send you the first 7 for free! 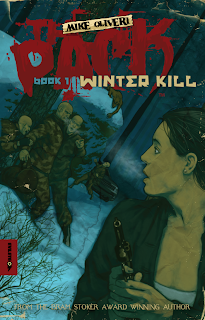 This contest is now over.


Dan G. from Michigan is the winner.


Thanks to all of those who entered.

Ladies and Gentlemen, it's time for another giveaway! This time around, we're looking at 1 copy of Mike Oliveri's incredible offering - The Pack: Winter Kill. Check out the review here.


I LOVE this book (as you can see by the review), and would love to give more copies away...but I've only got one. That's right. 1 copy.


Here's what you've got to do. (do any of the following)


I want to see LOTS of love for Mike Oliveri. Follow him on Twitter (@MikeOliveri), check out his Website (http://www.mikeoliveri.com/), contact your local bookseller and DEMAND that they stock any and all of Oliveri's works. Post news about Oliveri's previous and upcoming products on message boards (just be respectful and keep it in context).


We'll run this for 2 weeks, ladies and gents. So, you have until October 15th to pimp the hell out of this book. Get at it, and maybe you'll win a free copy!


Contact me at my email address on Oct 15th with your progress with the subject line THE PACK:WINTER KILL CONTEST. 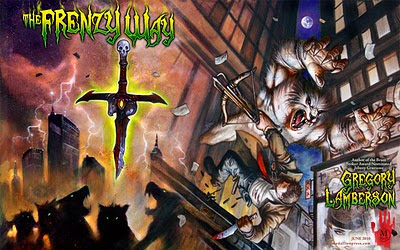 The Frenzy Way giveaway.
The contest is now over. I have selected two winners.


Thanks to everyone who entered. I really hadn't expected that many entries! All of the stories were great, but I could only pick 2 (which SUCKS).


You winners are Adam Blomquist and Melissa Denton.

For your reading pleasure, here are the winning sumissions:

Plastic trash bags, twist ties, perfume: she was ready to begin. Lauren looked up at the darkening sky and slipped off her tanktop. She held the straps between her fingers and neatly folded it. Then she took off her jeans, panties and finally her bra. She folded the clothes and placed them in one of the plastic bags. The sun was completely absent from the horizon now. She picked up the perfume and gave herself a quick spray, even spritzing a bit in her ears and mouth. As the moon showed its first tantalizing sliver of light, she felt her ribcage begin to expand. It stretched her human skin tight over her torso. It hurt like hell, but she was used to it by now.

Grunting through the pain she grabbed a second trashbag, holding it between her rapidly elongating fingernails and began to tear the stretched out skin from her body. Beginning at her kneecap she poked a claw under her skin and began to tease a strip off, when it tore at her waist she chucked it into the garbage bag. Instead of muscle and blood underneath the skin, she had sprouted a fine layer of chestnut colored fur.

Once her hands had completely transformed she could no longer hold the bag, but by that time 90% of her old skin was tidily stored away. As her snout began to push at her face she clenched down with an enormous claw and ripped of the skin like a mask. She felt her vision sharpen as she looked up at the full moon.

When this had first happened, Lauren didn't know what to do with herself, screaming and thrashing. But now she knew the perfect way to limit the mess she caused when she got ready for a night on the town.

Melissa's entry (which originally came as a screenplay - points for uniqueness!):

As the black and white fuzzy snow onscreen dies out the image of the hallway outside the restroom comes into focus. Officer Campbell fast-forwards through the uneventful scenes in the tape and stops when he sees Shelly run into the bathroom. It looks like she’s holding her stomach. Ray follows looking concerned. Shortly after Ray is backing out into the hall, and Shelly is walking towards him doubled over, her back looking like the Hunchback of Notre Dame. Bones crack and echo through the empty halls like firecrackers. Shelly’s on her hands and knees, Ray is stunned with fear unable to move, her clothes rip and fall to the floor to reveal a hairy body beneath. Even through the grainy resolution of the old security equipment and the aged machine playing the tape the officer, principal, and secretary can see sharp nails spurt out from the young girl’s finger tips. Thick brown hair grows out from her face and head like cheese wiz spraying from the can. What was moments ago a cute frail girl, now a thick hairy muscular beast, whips its head back howling to reveal long sharp fangs dripping with spittle. Ray trips over his own feet in an attempt to run, but his fate is inevitable as the beast leaps in one effortless spring, pouncing on the boy and ripping out his neck. A thick piece of his flesh hangs from her mouth with veins stringing down like red ribbons. It moves onto his stomach, violently pulling out swollen tubes of intestines feeding until his stomach is almost completely hallow. The beast bites down on Ray’s ravaged neck pulling him back into the restroom. After a short time Shelly emerges naked and covered in blood, snatches up her torn and discarded clothes, and runs off
down the hall only to return again with a set of seemingly clean clothes and enters the bathroom. The next and last time she’s on camera again, Shelly is laughing and sobbing intermittently covered
afresh in the blood of her victim, obviously trying to force herself into hysterics.

Thanks again, everybody. If I had enough money, you'd all have won. But don't fear, I'll be giving away 1 copy of Mike Oliveri's The Pack: Winter Kill, very very soon.

For all of your Industrial, Gothic, and Electronic music needs.

A guide to weird, wild, and wacked cinema

Books of the Dead Press

Paperback Horror has merged with Dreadful Tales (www.dreadfultales.com.) in order to create a better genre lit experience for all involved.

If you still wish to contact Colum, please send an email to paperbackhorror @ gmail . com.